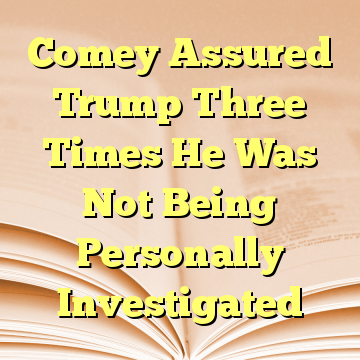 (Worthy News) – James Comey told President Donald Trump three times that he was not personally being investigated by the FBI, confirming the president’s account.

The Senate Intelligence Committee released the fired FBI director’s prepared remarks ahead of his testimony Thursday, which refute numerous news reports that claimed President Trump was not telling the truth about his conversations with Comey.

In his letter firing the FBI director in May, Trump said he was grateful to Comey for telling him he was not under investigation “on three separate occasions.” Trump then repeated his account during an interview with NBC News’ Lester Holt. [ Source ]

Comey Releases Opening Statement of Senate Testimony
Comey told Trump 3 times that he wasn’t under investigation, but his refusal to publicly say so infuriated Trump