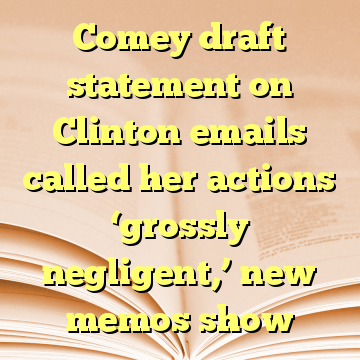 Originally Comey accused the former secretary of state of being “grossly negligent” in handling classified information in a draft dated May 2, 2016, but that was modified to claim that Clinton had been “extremely careless” in a draft dated June 10, 2016.

Comey stuck to that modified language when he announced in July 2016 that there would be no charges against Clinton.

Federal law states that gross negligence in handling the nation’s intelligence can be punished criminally with prison time or fines, according to The Hill, which first reported on the memos. [ Source: Fox News (Read More…) ]