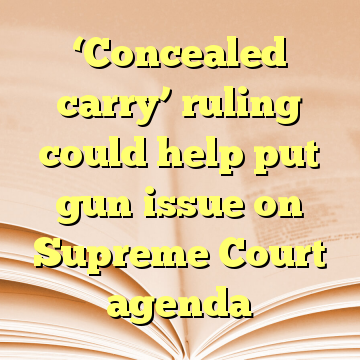 (Worthy News) – A federal appeals court let stand Thursday a decision that it is unconstitutional to require firearms owners prove a “good reason” in order to carry legally a concealed handgun in the nation’s capital — a win for gun rights advocates that has the potential to send a significant Second Amendment case to the Supreme Court.

The D.C. government had petitioned for the full U.S. Court of Appeals for the D.C. Circuit to rehear a lawsuit against the city’s gun laws, but the court declined to revisit the 2-1 decision handed down earlier this year, noting that none of the 10 judges who considered the matter requested a vote on it.

The decision leaves in place the D.C. Circuit’s prior ruling, which found that the city’s “good reason” requirement was unconstitutional.

It also sets up the potential for the Supreme Court to take up the case as the decision creates a split with four other federal circuits that have found discretionary permitting schemes elsewhere are legal. [ Source (Read More…) ]