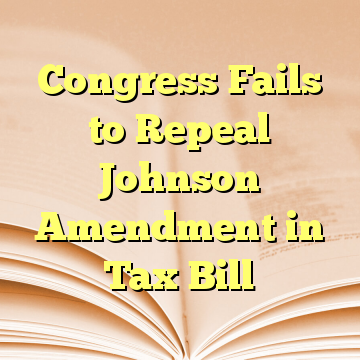 (Worthy News) – A measure within the federal tax overhaul bill that would end the IRS regulation barring churches from endorsing political candidates has been removed from the proposed legislation.

The Senate’s parliamentarian struck out the language overturning the Johnson Amendment, with the Hill reporting last week that the reason was because it “did not meet Senate rules that require elements of the tax bill to have something to do with the budget.”

“The Senate is seeking to move a House-Senate conference report under special budgetary rules that prevent Democrats from using a filibuster,” explained The Hill. [ Source: Christian Post (Read More…) ]