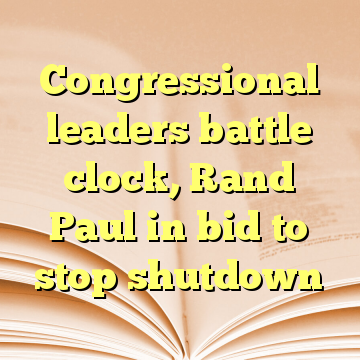 (Worthy News) – Congressional leaders were racing another government shutdown clock Thursday night, searching for votes to approve a budget deal that could set the stage for the biggest spending increase in U.S. history.

At least a short shutdown — the second in less than a month — was likely, with Sen. Rand Paul vowing to force the debate into the early hours of Friday morning, past the midnight deadline when funding would expire.

Mr. Paul, Kentucky Republican, acknowledged he was fighting an uphill battle, but he said the public needed more time to process the massive bill, which clocked in at 652 pages and was dumped onto lawmakers’ desks late Wednesday night. [ Source: Washington Times (Read More…) ]