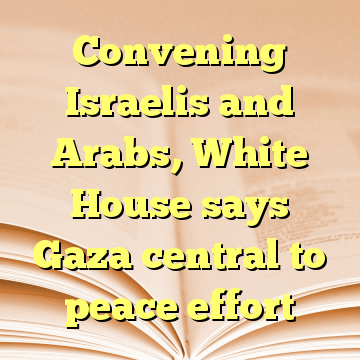 (Worthy News) – Trump administration officials worked the phones for weeks to bring Israeli and Arab diplomats around the same table at the White House, and finally succeeded in doing so for the first time on Tuesday.

Senior administration officials said several parties to the US conference, which focused on the dire and pressing humanitarian plight facing Palestinians in the Gaza Strip, had expressed that “they could not be in the same room as each other.”

And yet, “we had discussions with them, and everybody realized the importance of being in the room,” one senior official told The Jerusalem Post after the six-hour conference, held in the gilded Indian Treaty Room of the executive office building.

The discussion brought national security officials from Israel, Saudi Arabia, Qatar, the United Arab Emirates, Oman and Bahrain together for an exceptional diplomatic moment – the possible start of a regional dialogue over Israeli-Palestinian peace, ahead of the publication of a peace plan by the Trump administration meant to comprehensively end claims to the conflict. [ Source: Jerusalem Post (Read More…) ]