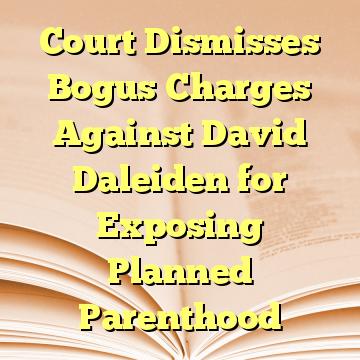 California Attorney General Xavier Becerra filed 15 felony charges against both David Daleiden and Sandra Merritt. Becerra is a longtime abortion advocate with financial connections to the Planned Parenthood abortion company that the two pro-life Advocates exposed in the videos for selling body parts such as fetal brains and livers.

The San Francisco Superior Court on Wednesday dismissed 14 of 15 criminal counts but the pair are still charged with one count of conspiracy to invade privacy. However, the court dismissed the charges with leave to amend — meaning Becerra could re-file the charges with additional supposed evidence against the pair.

Liberty Counsel argued that the criminal complaint for illegally recording supposedly “private” conversations (in restaurants, hotel lobbies and other public places) – the first ever filed against undercover journalists – was legally deficient for numerous reasons, not the least of which was the Attorney General’s decision to prosecute Merritt in secret proceedings, without identifying even the names of her accusers or purported “victims.” The complaint did not provide Merritt with the minimum notice required by the Constitution and California law as to what she supposedly did wrong, so that she can mount a proper and vigorous defense. The complaint was also vague and full of inconsistencies. [ Source ]