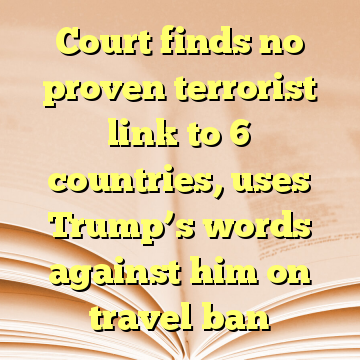 The court also became the latest court to throw the president’s own words back at him — this time using Mr. Trump’s Twitter posts last week, saying the president’s claims of a travel ban aimed at “certain dangerous countries” prove he went beyond the law.

In a unanimous ruling, the three-judge panel of the 9th U.S. Circuit Court of Appeals said that while Mr. Trump claimed he was acting in the interests of national security, they found his reasoning lacking. Without a better justification, they said, his extreme vetting executive order is illegal. [ Source ]