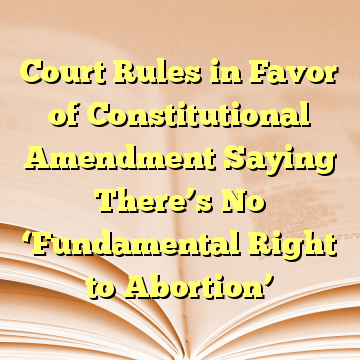 (Worthy News) – In a resounding victory for pro-life Tennesseans, judges on the U.S. Sixth Circuit Court of Appeals have rejected the pro-abortion effort to overturn the 2014 voter passage of Amendment 1, which states: “Nothing in this Constitution secures or protects a right to abortion or requires the funding of an abortion.”

“Although the subject of abortion rights will continue to be controversial in Tennessee and across our nation, it is time for uncertainty surrounding the people’s 2014 approval and ratification of Amendment 1 to be put to rest,” wrote Senior Judge David McKeague, a 2005 appointee of George W. Bush.

Tennessee Right to Life expresses profound gratitude to the many supporters, advocates, and voters who sacrificed to see Amendment 1 placed on the ballot and passed by public vote. It was made necessary by a radical pro-abortion decision by the Tennessee Supreme Court in 2000 which wrongly declared a so-called “fundamental right to abortion” in the Tennessee Constitution thereby making enforcement of common-sense protections impossible in Tennessee. [ Source: Life News (Read More…) ]