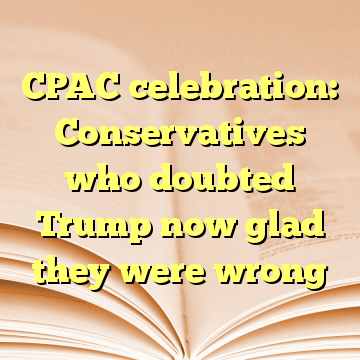 (Worthy News) – A CPAC/Washington Times poll of more than 1,100 attendees found that 93 percent of conservatives approve of the job Mr. Trump has done over his first year in office — up from 86 percent last year.

The crowd also was more optimistic about the direction of the nation than they were a year ago, with 75 percent saying the nation is on the right track, compared with 44 percent last year.

Conservatives are increasingly pushing for congressional Republicans to take their cue from Mr. Trump, with 79 percent saying Republican majorities in the House and Senate should be doing more to support the president — up from the 67 percent in last year’s poll. Just 4 percent of the conservatives said Congress should try to stymie Mr. Trump’s agenda. [ Source: Washington Times (Read More…) ]