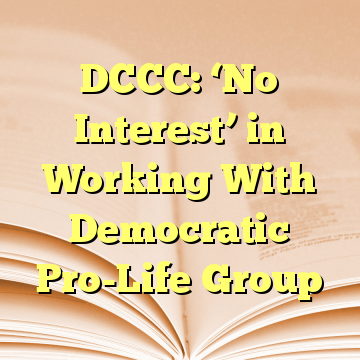 (Worthy News) – The Democratic Congressional Campaign Committee (DCCC) has “no interest” in working with Democrats for Life of America, a pro-life Democratic organization.

This according to a DCCC spokeswoman, Meredith Kelly, speaking to the Atlantic. Kelly’s comments contribute to the on-going confusion as to whether or not the Democratic party will be welcoming to pro-life candidates for office in 2018.

Kristen Day, a member of Democrats for Life, told the Atlantic that “lines of communication were open” between her group and the DCCC. But Kelly rejected Day’s claim.

“The DCCC has no interest in working with Democrats for Life of America, despite their attempts,” she said. [ Source (Read More…) ]