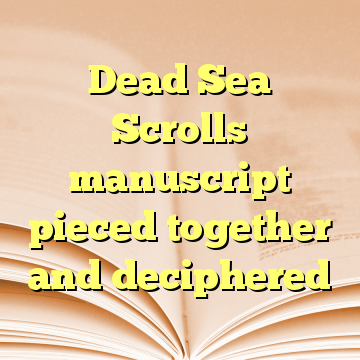 (Worthy News) – Israeli scholars have pieced together and deciphered one of two previously unread manuscripts of the Dead Sea Scrolls more than half a century after their discovery, an Israeli university has said.

The more than 60 tiny fragments of parchment bearing encrypted Hebrew writing had previously been thought to come from a variety of different scrolls, a Haifa University spokesman said.

But Eshbal Ratson and Jonathan Ben-Dov of the university’s Bible studies department found the pieces all fit together after they started examining them just under a year ago, Ilan Yavelberg said. [ Source: UK Telegraph (Read More…) ]