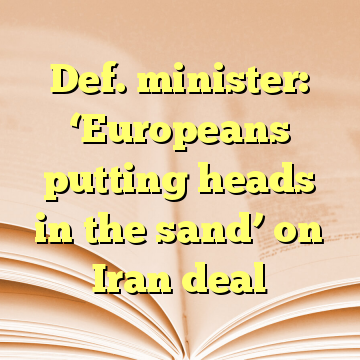 The leaders of the three European countries, whose companies have made massive business deals with Iran, issued a joint statement saying they “stand committed” to the deal and are concerned about the implications of Trump’s refusal to back it.

“The Europeans continue to put their heads in the sand, exactly like they did before World War II,” Liberman told Channel 2. “The leaders of Europe prefer to run away from reality.” Liberman praised Trump for sending the Iran deal back to Congress for reevaluation, calling it a “courageous and correct decision.” The defense minister added that “Israel must be ready to handle Iran by itself without the US.” [ Source: Jerusalem Post (Read More…) ]