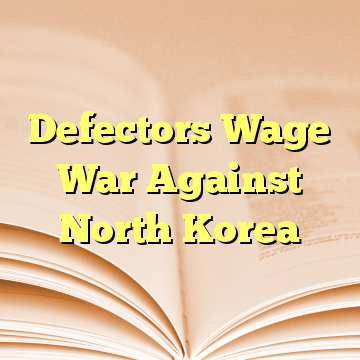 (Worthy News) – According to citizens who have fled the country, a growing number of North Koreans are switching on unauthorized radios—devices they’ve rigged or bought on the black market that can pick up signals beyond the country’s darkened borders. They listen to programs tailored to reach them with news about the outside world—and the reality of their own regime. Perhaps the most effective messengers: North Korean defectors.

A radio may be no match for a missile, but it’s clear North Korean leaders fear an informed people. They’re reportedly jamming signals along the borders and tracking contraband cell phones and have reportedly executed citizens for watching banned DVDs.

DURING A LATE-NIGHT BROADCAST from Seoul, the voice of a North Korean defector breaks across a radio transmission: “Brothers and sisters in the North, I hope this time can be a moment of prayer for a miracle that every party member of North Korea … can meet God, not take a further step into the cult of personality.”

But radio host Kim Chung-seong of the Far East Broadcasting Company (FEBC) continued, his bold words picked up by a Reuters report: “I am desperately praying that North Korea’s Kim Jong Un and all administrators under him kneel down in front of God and repent for their sins, and leave the path of tormenting their people.”  [ Source (Read More…) ]