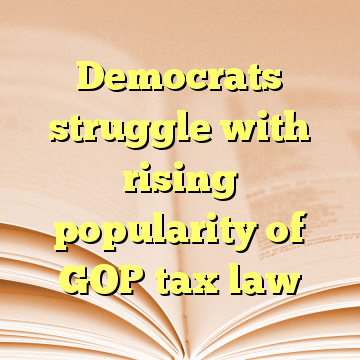 (Worthy News) – Democrats are struggling to cope with the rising popularity of the Republican tax law, less than nine months until the midterm elections.

Democrats received a wake-up call of sorts earlier this week when Priorities USA, a top Democratic super PAC, released a memo calling on Democrats to message more consistently against the tax law. The law’s standing has increased in the polls as GOP groups pitch the tax cuts to voters as a solid Republican accomplishment.

According to the memo, Trump’s marks on both the economy and taxes have grown by double-digits over the past few months. Another poll released this week shows Republicans leading in the generic congressional ballot for the first time, largely due to the rise in popularity of the tax bill, forcing Democrats to reexamine their messaging in the coming months. [ Source: Washington Examiner (Read More…) ]