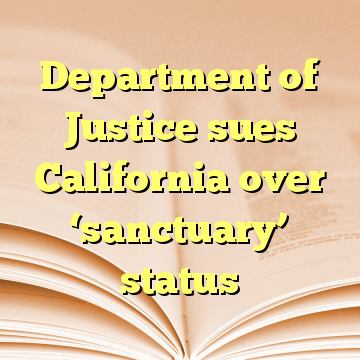 (Worthy News) – The Department of Justice is taking action against the state of California — including Gov. Jerry Brown and Attorney General Xavier Becerra — for three laws they say obstruct the enforcement of federal immigration law.

The Justice Department’s lawsuit — expected to be filed Tuesday night in the Eastern District of California — is asking for Assembly Bill 450, Senate Bill 54, and Assembly Bill 103 to be nullified.

Justice Department officials explained ahead of the filing that the three laws — which were all passed within the past year — are pre-empted by federal law and therefore violate the Supremacy Clause of the U.S. Constitution. [ Source: Washington Examiner (Read More…) ]