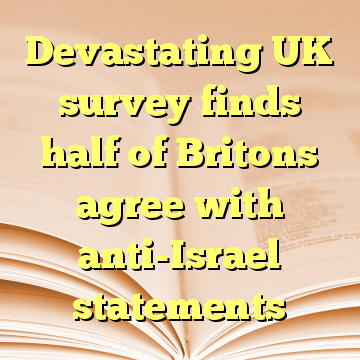 (Worthy News) – Nearly one in three Britons holds at least one anti-Semitic attitude and more than half endorse at least one hard-line anti-Israel statement, finds a major new study published today.

It also establishes an “unambiguous” link between anti-Semitism and hostility towards Israel – suggesting that the stronger the level of anti-Israel feeling, the more likely it is to be accompanied by anti-Semitic attitudes – and probes the attitudes of those who support the far-left and the far-right, as well as British Muslims.

But the report – the largest and most detailed survey of attitudes towards Jews and Israel ever conducted in Britain – also concludes that the proportion of what it terms “hardcore anti-Semites” in the population is small, while most Britons hold a favorable opinion of Jews and the vast majority do not harbor any anti-Semitic views. Moreover, it found that only 6% of Britons believe Israel has no right to exist, and less than 10% back the BDS movement. [ Source (Read More…) ]