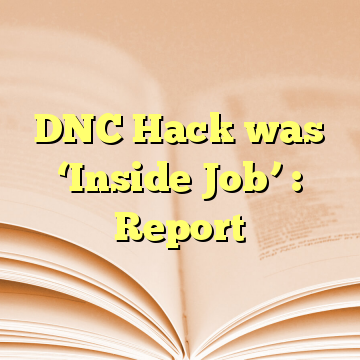 (Worthy News) – The Democratic National Committee was not hacked by Russia — nor by anyone else — but instead was ‘an inside job by someone with access to the DNC’s system,’ according to a report in The Nation.

There was no hack of the Democratic National Committee’s system on July 5 last year—not by the Russians, not by anyone else. Hard science now demonstrates it was a leak—a download executed locally with a memory key or a similarly portable data-storage device. In short, it was an inside job by someone with access to the DNC’s system. This casts serious doubt on the initial “hack,” as alleged, that led to the very consequential publication of a large store of documents on WikiLeaks last summer.

Forensic investigations of documents made public two weeks prior to the July 5 leak by the person or entity known as Guccifer 2.0 show that they were fraudulent: Before Guccifer posted them they were adulterated by cutting and pasting them into a blank template that had Russian as its default language. Guccifer took responsibility on June 15 for an intrusion the DNC reported on June 14 and professed to be a WikiLeaks source—claims essential to the official narrative implicating Russia in what was soon cast as an extensive hacking operation. To put the point simply, forensic science now devastates this narrative. [ Source (Read More…) ]