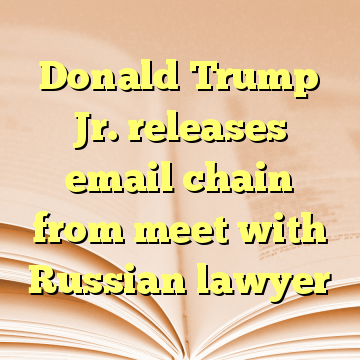 (Worthy News) – Donald Trump Jr. on Tuesday released the entire email chain that arranged a meeting between himself and a Russian lawyer that show he was offered “high level and sensitive information” which came from within the Russian government and was said to be of help to his father’s presidential campaign.

President Trump’s eldest son said he released the emails for the sake of transparency but the disclosure set off a new firestorm of controversy for the Trump team by firmly establishing that the campaign had been willing to glean dirt on rival Hillary Clinton from a foreign power.

The email chain from June 2016 largely supports the younger Mr. Trump’s earlier story that he agreed to the meeting after being told he would receive information damaging to Democratic presidential nominee Hillary Clinton. [ Source: Washington Times ]