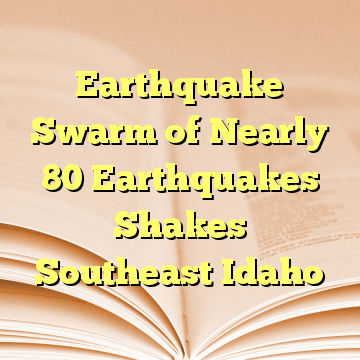 (Worthy News) – The strongest earthquake to hit the region in years as well as 77 smaller quakes occurred Saturday night to Monday afternoon in Southeast Idaho, startling tens of thousands of residents.

The quakes have been felt in Caribou County, where all 78 occurred, as well as in cities in northern Utah and throughout Southeast Idaho. It’s unknown when the earthquake swarm will end. Earthquake swarms have been known to continue for weeks or even months.

Bannock County Sheriff Lorin Nielsen said he’s been a law enforcement officer in Southeast Idaho for over 40 years and during that time there’s never previously been so many earthquakes occurring in such a short time frame. He said at the most there have been up to three earthquakes that have occurred in short succession along the East Idaho-Western Wyoming border. The dozens of earthquakes that have occurred since Saturday night in Southeast Idaho are unprecedented, the sheriff said. [ Source (Read More…) ]