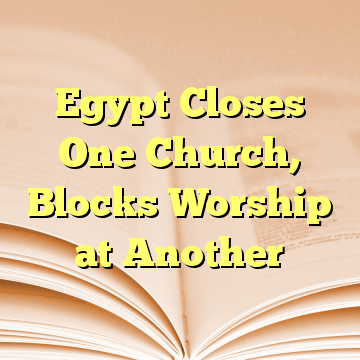 (Worthy News) – Authorities have closed a church that serves three villages in Upper Egypt on the pretext that area Muslims object to it – one of at least 15 Christian worship sites shuttered in the bishopric of Minya, sources said.

Coptic Orthodox Bishop of Minya Anba Makarios spent weeks appealing to security officials to re-open the Virgin Mary and St. Paula Church in Minya Governorate’s Kedwan village, which was closed in July. When those talks failed, the bishop issued a statement denying security agency assertions that area Muslims object to the 1,300-member church, saying they live peaceably with Coptic Christians and that any opposition comes from a small extremist faction.

“There is actually no disagreements or disputes between the Copts and Muslims,” he said. “He among them who opposes [opening the church], if any is found, gives the excuse of the necessity to obtain a security clearance. Regardless of whether these may be right in their opposition or not, the authorities instead of responding by pointing out that this is the prerogative of the state institutions, or by stating that allowing prayer is a legal right, affirm prevention of prayer! In doing so, they underscore at the same time that the opposing factions are right in their reasoning.” [ Source (Read More…) ]