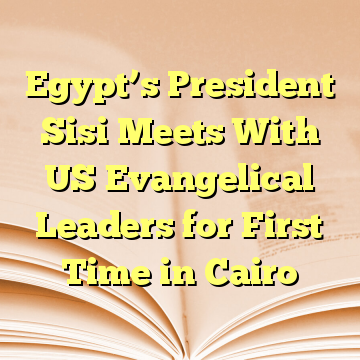 (Worthy News) – For the first time ever, a delegation of evangelical leaders from the United States met with Egypt’s President Abdel Fattah el-Sisi for nearly three hours at the presidential palace in Cairo on Wednesday to talk about a series of issues including the persecution of Egyptian Christians by Islamic extremists.

“I appreciate the opportunity to meet with President el-Sisi to discuss the concerns we have, as American evangelicals, for the plight of religious minorities in Egypt, especially those who are our brothers and sisters in Christ,” Family Research Council President and Baptist Pastor Tony Perkins said in a statement shared with The Christian Post.