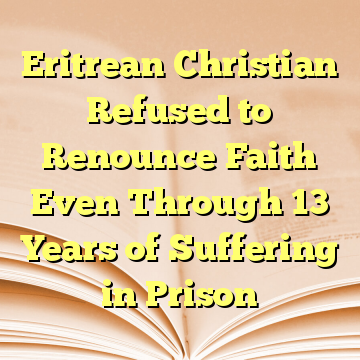 (Worthy News) – An Eritrean Christian has opened up about the 13 years of suffering he underwent for his faith in prison, including being punished for months at a time in a confined cell where he could not even stretch his limbs. Despite the suffering, he refused time and time again to renounce his faith.

World Watch Monitor reported on Tuesday that Shiden first came to faith in his late teens, despite the country’s hostile treatment of evangelical Christians. He joined military service at the age of 22, but was caught during a secret worship meeting with other Christians.

From there he was moved to prison camps where he was made to suffer under harsh conditions, such as no sanitation, with guards taunting him and telling him to renounce his Christianity. [ Source: Christian Post (Read More…) ]