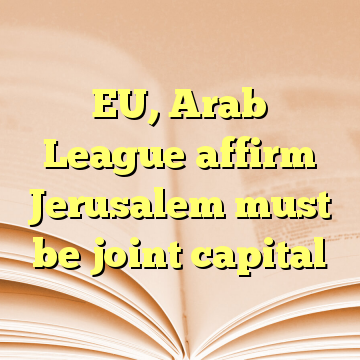 (Worthy News) – European Union and Arab League countries insisted on Monday that Jerusalem must be the joint capital of Israel and a future Palestinian state, after US President Donald Trump announced its embassy would be moved to the city later this year.

The US State Department notified Congress on Friday that the Jerusalem embassy would open in May to coincide with the 70th anniversary of Israel’s independence, speeding up the process by converting a building that currently houses consular services to be the embassy. The State Department confirmed the timing of the move.

The Palestinian Authority responded in anger to the news, saying “unilateral” moves would not contribute to achieving peace between Israel and the Palestinians. [ Source: Times of Israel (Read More…) ]