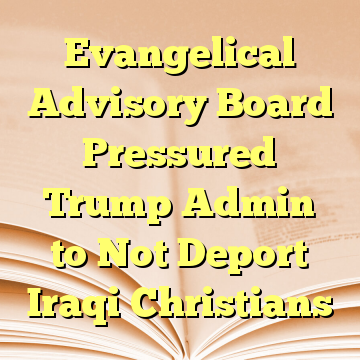 (Worthy News) – Members of President Donald Trump’s evangelical advisory council have directly voiced their concerns to the administration about its efforts to deport over 100 Iraqi Christians back to a nation in which they could face persecution for their faith in Christ.

Members of Trump’s evangelical advisory board who took part in the all-day meeting told The Christian Post that the gathering lasted from about 9 a.m. to 4 p.m. Throughout the day, members of the administration would come in and give briefings and generate discussion around certain issues. [ Source:Christian Post (Read More…) ]