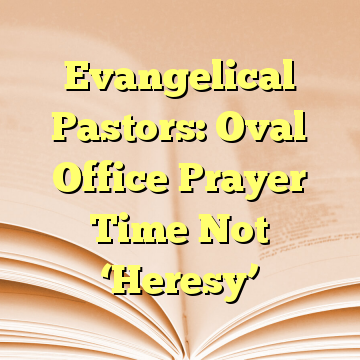 (Worthy News) – Evangelical pastors who prayed for President Trump in the Oval Office last week say they were fulfilling a Scriptural command (1 Timothy 2:1-3) to pray for government leaders and not engaging in something that “borders on heresy.”

The heresy charge comes from Rev. William Barber, a rising leftist pastor from North Carolina who has become a national religious voice in speaking against Donald Trump during his campaign and presidency.

On Saturday, Barber told MSNBC’s Joy Reid that he believes the healthcare reform promoted by the president is “hypocrisy and sin” because it allegedly transfers wealth from the poor to “the greedy.”

In light of such policies, Barber said that faith leaders should not pray for the president but challenge him.

“It is a form of theological malpractice that borders on heresy when you can p-r-a-y for a president and others while they are p-r-e-y – preying on the most vulnerable. You’re violating the most sacred principles of religion,” he said. [ Source: CBN News (Read More…) ]