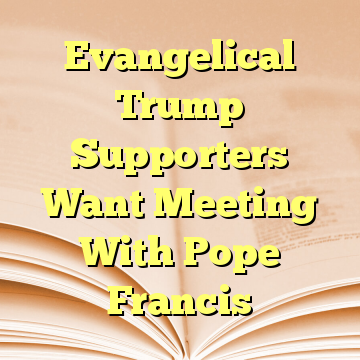 (Worthy News) – Evangelical supporters of President Donald Trump on Monday requested a meeting with Pope Francis over a recent critical article in a Vatican-vetted journal.

Johnnie Moore, a leader of Trump’s evangelical advisory board and a spokesman for some of its members, said he sent the request to Rome in response to an article published last month that accused some American Catholics of building an alliance of “hate” with evangelicals who backed the president.

The two authors of the piece are confidants of Francis. They published their article in the Jesuit journal La Civilta Cattolica, which is reviewed by the Vatican Secretariat of State. [ Source: US News and World Report (Read More…) ]