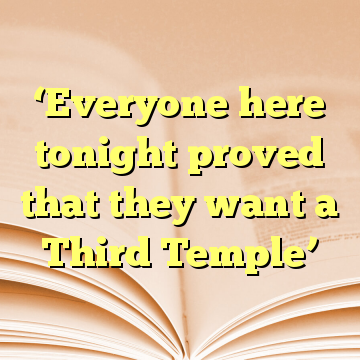 (Worthy News) – Thousands of Israelis converged on Jerusalem’s Old City Monday night, marching around the walls of Jerusalem to commemorate the destruction of the Temple.

MK Glick, a noted Temple Mount activist, focused his speech on the recent terror attacks that rocked Israel. “This past year, the police have paid a very high price. Five policemen were killed here” he said. “We’ve gotten to the root of everything, the Temple Mount”

Glick noted the sharp increase of Jewish visitors on the Temple Mount. calling it a miracle, along with the re-settlement of Judea and Samaria saying that “The IDF can defeat its enemies in battle, but those who give them the power to win are the people tonight, mothers and children who are putting facts on the ground.”

Deputy Defense Minister Eli Ben Dahan echoed Glick’s remarks, saying that “everyone who came here tonight proved with his feet that we want the Temple back – and quickly.” [ Source:Arutz Sheva (Read More…) ]