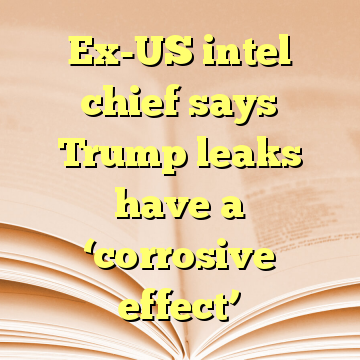 (Worthy News) – US President Donald Trump’s sharing of Israeli intelligence with Russia without prior coordination “has an erosive and corrosive effect” on global data sharing with Washington, a former US intelligence chief told The Jerusalem Post.

“I am not surprised that [Israel’s] intelligence officials were appalled by it. There have been similar reactions from other countries as well,” Former Defense Intelligence Agency chief and CIA veteran David Shedd said in a telephone interview after ex Mossad chiefs urged Israel to temporarily freeze intelligence sharing with Washington after the leak.

Shedd gives Trump a range of minuses but also some pluses in intelligence and national security. He noted how England had also recently frozen intelligence-sharing after a US official revealed classified British intelligence. The former defense intelligence chief voiced the concerns of foreign allies, saying they might ask, “Is this a person who can be trusted with sources and methods? Hopefully a little further down that path the answer becomes ‘yes’. [ Source (Read More…) ]