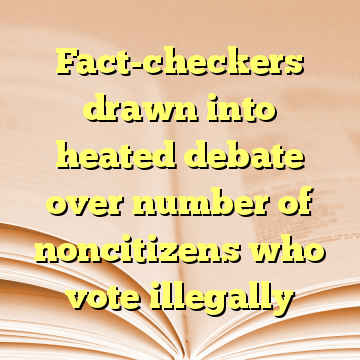 (Worthy News) – A right-leaning fact-checker is fighting critics on the left who say its conclusion that a lot of noncitizens vote illegally is bunk.

Just Facts President James D. Agresti issued a blockbuster report in June. Using previous research, polling data and Census Bureau figures, his team concluded that as few as 594,000 noncitizens or as many as 5.7 million voted in the 2008 presidential election. If accurate on the high side, it would vindicate Mr. Trump’s contention that a lot of illegal ballots were cast in his race for the White House last year with Democrat Hillary Clinton.

As background, Mr. Agresti points to a scientific survey by the marketing consultancy McLaughlin & Associates. In a poll of Hispanics for the California wine industry, 13 percent of noncitizens said they were registered to vote. Matched against the country’s noncitizen population, that means 800,000 to 2.2 million aliens were registered to vote, Just Facts concluded.