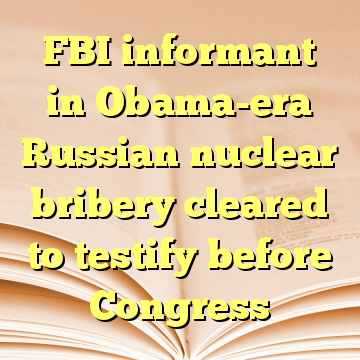 (Worthy News) – The Justice Department on Wednesday night released a former FBI informant from a confidentiality agreement, allowing him to testify before Congress about what he witnessed undercover about the Russian nuclear industry’s efforts to win favorable decisions during the Obama administration.

Justice Department spokeswoman Sarah Isgur Flores confirmed to The Hill a deal had been reached clearing the informant to talk to Congress for the first time, nearly eight years after he first went undercover for the FBI.

“As of tonight, the Department of Justice has authorized the informant to disclose to the Chairmen and Ranking Members of the Senate Committee on the Judiciary, the House Committee on Oversight and Government Reform, and the House Permanent Select Committee on Intelligence, as well as one member of each of their staffs, any information or documents he has concerning alleged corruption or bribery involving transactions in the uranium market, including but not limited to anything related to Vadim Mikerin, Rosatom, Tenex, Uranium One, or the Clinton Foundation,” she said. [ Source: The Hill (Read More…) ]