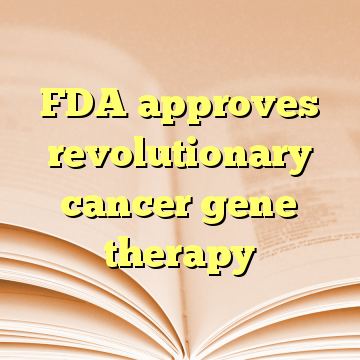 (Worthy News) – U.S. regulators approved on Wednesday a new therapy for a type of lymphoma, which was developed by Gilead Science Inc’s Kite Pharma, marking the second approval for this potentially revolutionary approach to fighting cancer.

The Food and Drug Administration approved the gene therapy, to be sold under the name Yescarta, to treat adults with large B-cell lymphoma, a type of non-Hodgkin lymphoma, who have failed to respond to other treatments.

The treatments are made from a patient’s own infection-fighting cells. They are extracted, genetically engineered to recognize cancer cells, and infused back into the patient, where they form an army to attack and destroy malignant cells, potentially for years. [ Source: Reuters (Read More…) ]