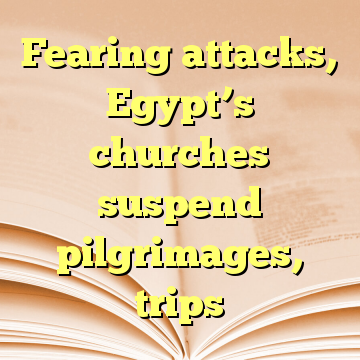 (Worthy News) – Egyptian churches on Thursday suspended pilgrimages, holidays and conferences for the remainder of July and August after authorities warned them about possible attacks by Islamic militants.

Ishak Ibrahim, an activist and a top researcher on the Egyptian church, reported the suspension by the majority Coptic Orthodox and the smaller Anglican and Catholic churches. Security officials, pastors and other activists confirmed the suspension.

They said the warning was delivered to church representatives during a meeting this week with top army and security commanders in the southern city of Assiut. They have also been told that army troops backed by armored vehicles and snipers would be deployed outside monasteries hosting major religious festivals in coming weeks. At least two of these festivals will take place in Assiut, home to a sizable Christian community. [ Source ]