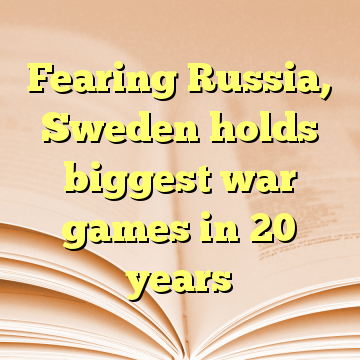 (Worthy News) – Neutral Sweden has launched its biggest war games in two decades with support from NATO countries, drilling 19,000 troops after years of spending cuts that have left the country fearful of Russia’s growing military strength.

On the eve of Russia’s biggest manoeuvres since 2013, which NATO says will be greater than the 13,000 troops Moscow says are involved, Sweden will simulate an attack from the east on the Baltic island of Gotland, near the Swedish mainland.

“The security situation has taken a turn for the worse,” Micael Byden, the commander of the Swedish Armed Forces, said during a presentation of the three-week-long exercise. [ Source: Reuters (Read More…) ]