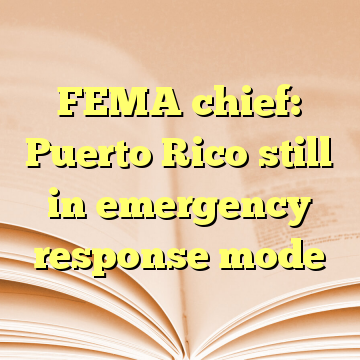 (Worthy News) – Nearly four months after two hurricanes hit this island, the chief of the Federal Emergency Management Agency’s operations in Puerto Rico says he has never before had to continue emergency relief efforts like delivering food, water and temporary roofing so long after a natural disaster.

“So this far into a disaster in my experience, at least in the last 20 years, we never do that, we’re never — the food and water would have stopped weeks ago. But we can’t, and one of the driving factors for that is power,” Michael Byrne, an acting regional administrator for FEMA, told The Washington Times.

Since Sept. 6, FEMA had been responding to a state of emergency on Puerto Rico in the aftermath of Hurricane Irma when Hurricane Maria made landfall on the U.S. territory on Sept. 20. About 1 million islanders had lost power during Irma, when Maria killed electricity for nearly the entire 3.5 million population. [ Source: Washington Times (Read More…) ]