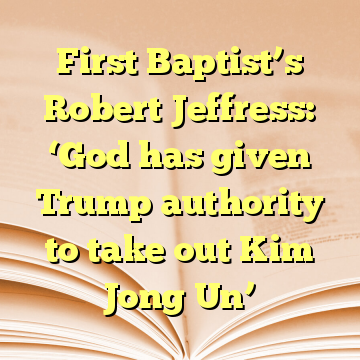 (Worthy News) – Dallas megachurch pastor Robert Jeffress, one of President Donald Trump’s evangelical advisers who preached the morning of his inauguration, has released a statement saying the president has the moral authority to take out North Korean leader Kim Jong Un.

“When it comes to how we should deal with evil doers, the Bible, in the book of Romans, is very clear: God has endowed rulers full power to use whatever means necessary – including war – to stop evil,” Jeffress said. “In the case of North Korea, God has given Trump authority to take out Kim Jong Un.”

Jeffress, who leads downtown’s First Baptist Dallas, said in a phone interview that he was prompted to make the statement after Trump said that if North Korea’s threats to the United States continue, Pyongyang will be “met with fire and fury like the world has never seen.” [ Source: Dallas Morning News (Read More…) ]