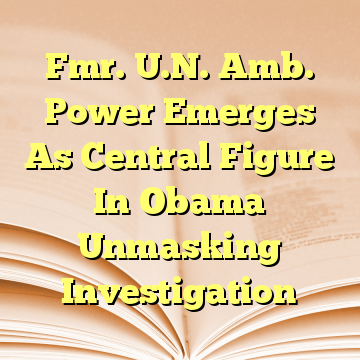 (Worthy News) – Former United Nations Ambassador Samantha Power’s involvement in the unmasking by former Obama administration officials of sensitive national security information is raising red flags over what insiders view was an attempt by the former administration to undermine President Donald Trump and key figures on his team, according to current and former U.S. officials familiar with the situation.

Power appears to be central to efforts by top Obama administration officials to identify individuals named in classified intelligence community reports related to Trump and his presidential transition team, according to multiple sources.

The names of Trump allies in the raw intelligence reports were leaked to the press in what many in Congress and the current administration claim is an attempt by Obama allies and former officials to damage the White House. [ Source:Washington Free Beacon (Read More…) ]