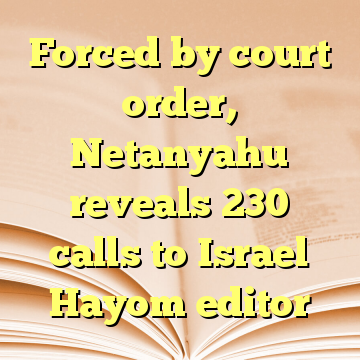 (Worthy News) – Forced by a Supreme Court order to reveal the dates of his phone calls with the owner and chief editor of a newspaper seen as staunchly loyal to him, Prime Minister Benjamin Netanyahu revealed on Thursday that from 2012-2015 he spoke with American Jewish casino mogul Sheldon Adelson almost once a week and nearly double that with then-Israel Hayom editor Amos Regev.

Earlier this month, the court accepted an appeal by Channel 10 journalist Raviv Drucker, and ordered Netanyahu to release the information on the phone calls, citing the public interest. On Sunday, Drucker threatened to file a motion for contempt of court against the prime minister if he continued to withold the information despite the ruling.

In a lengthy Facebook post Thursday night, the prime minister said that in the three years between 2012 and 2015, he spoke to Adelson on average 0.75 times a week, indicating there were some 117 phone calls with the Israel Hayom owner during that period. The calls with Regev occurred around 1.5 times a week on average, Netanyahu said, totaling over 230 calls.

“I will tell you something that everyone knows: All the politicians in Israel speak to publishers, editors-in-chief and journalists,” Netanyahu wrote in his own defense. “Between politicians and the media there is a constant and ongoing dialogue — this is what is accepted in democracies.” [ Source (Read More…) ]