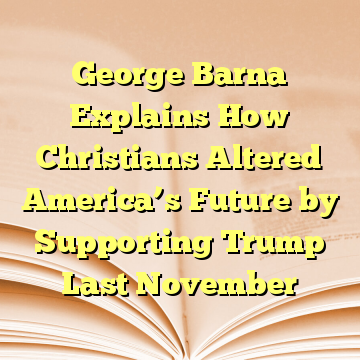 (Worthy News) – A veteran researcher has detailed how on Nov. 8, 2016, Christian conservatives altered the course of American history by voting overwhelmingly for and delivering victory to Donald Trump to be the 45th president of the United States. And though the mainstream press derides or ignores them, he says, such Christians will retain their influence if and only if they stay alert and engaged.

To the chagrin of secular progressives, particularly in the mass media, George Barna believes that spiritually active, government engaged conservatives — SAGE Cons he calls them — continue to leave an indelible mark on American political life. His latest book, The Day Christians Changed America: How Christians Conservatives Put Trump in the White House and Redirected America’s Future, showcases the impact both they and, more broadly, Christians had in the last election.

“When conservative Christians in America search for a candidate, they do it differently than most other Americans,” Barna said in a recent phone interview with The Christian Post. [ Source” Christian Post (Read More…) ]