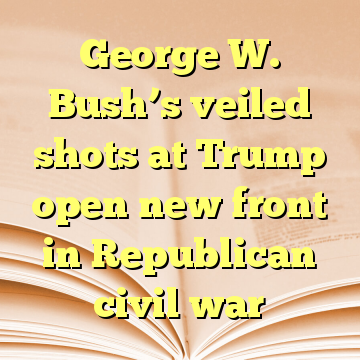 (Worthy News) – A fresh battle in the Republican civil war flared Thursday as former President George W. Bush took veiled shots at President Trump in a speech that warned against the rising tide of ethno-nationalism on the Right.

Bush sounded the alarm about “nationalism distorted into nativism,” chiding that American identity “is not determined by geography or ethnicity, by soil or blood.” He cautioned against the siren song of isolationism. The 43rd president never mentioned Trump.

But in issuing a clarion call for the conservative ideals of Ronald Reagan Republicanism, Bush was unmistakably rebuking the “America First” sloganeering of a 45th president who has questioned the value of U.S. internationalism and been accused of winking at white-identity politics. [ Source: Washington Examiner (Read More…) ]