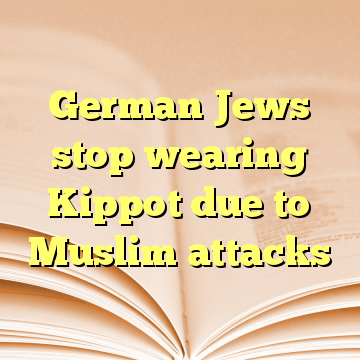 (Worthy News) – Members of the small Jewish community in the West German city of Bochum announced that they will no longer wear kippot because of attacks on them by Muslim youths.

Rabbi Abraham Cooper, the associate dean of the Simon Wiesenthal Center, told The Jerusalem Post on Tuesday, “Germans, more than any other people in Europe, should understand what starts with the Jews never ends with the Jews. When I raised the issue brought to Germany by many Arab and Muslim immigrants with the German justice minister, I was told this issue would be dealt with in the context of the German authorities’ efforts to integrate newcomers into German life and values.”

He added, “The German authorities, Church leadership and NGOs have a moral obligation to ensure 21st century German Jews will never have to hide their Jewish identities on the streets of Germany.” [ Source: Jerusalem Post (Read More…) ]