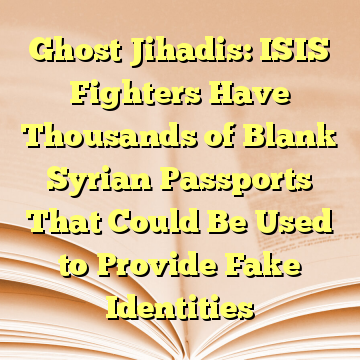 (Worthy News) – The Islamic State militant group (ISIS) has some 11,000 blank Syrian passports that could be used to provide fake identities for jihadists, German authorities believe.

The threat of jihadists creating a fake identity and using it to travel is one that concerns European security services, who are already anxious about foreign fighters returning to their native countries.

German authorities have created a list of the passport serial numbers that could be used by the group, German weekly newspaper Bild am Sonntag reported on Sunday. It cited German federal police and interior ministry documents.

“Developments in connection with the refugee situation have shown that terrorist organisations are using the opportunity to (smuggle) potential attackers or supporters into Europe and Germany undetected,” a spokeswoman for the federal police told the newspaper. [ Source (Read More…) ]