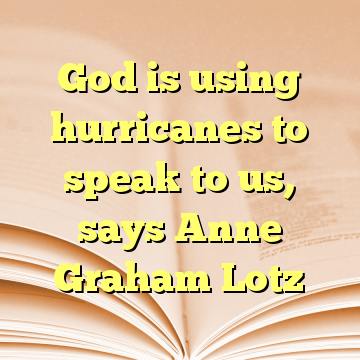 (Worthy News) – Is God trying to send people a message with all of the catastrophic natural disasters taking place all over the world? As far as Anne Graham Lotz of AnGel Ministries is concerned, the answer is yes.

Lotz, the daughter of world-renowned evangelist Billy Graham, wrote in an op-ed piece for Fox News that America has experienced “record-breaking fires in the northwest, record-breaking hurricanes in Texas and Florida, and a record-breaking earthquake in Mexico” within weeks.

But instead of dismissing these as random disasters or freaks of nature, Lotz said Christians should focus on its significance, which may be found in the book of 1 Kings 19.