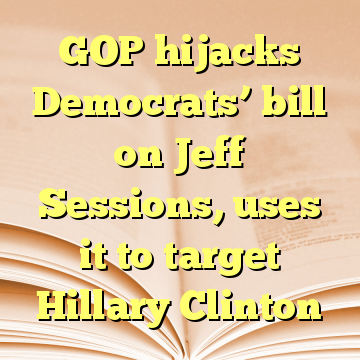 It happened after a 2.5-hour debate that devolved into a series of partisan point scoring and sanctimony on dozens of political scandals ranging from the Nixon administration to the Clinton impeachment, to the more modern inquiries to determine how damaging Russia’s influence was on the 2016 elections.

Democrats were hoping to put Republicans on the spot with a “resolution of inquiry” that, if it had passed, would have asked the Department of Justice to provide documents related to any potential involvement Sessions had in the firing of former FBI Director James Comey.

But Republicans used their majority in the committee to tack on an amendment that struck the Democrats’ language and instead called for a special counsel to investigate matters more closely related to Hillary Clinton and the Obama administration. That includes the recently revealed information that former Attorney General Loretta Lynch asked Comey to refer to the Clinton email scandal as a “matter” instead of an “investigation.” [ Source:Washington Examiner (Read More…) ]