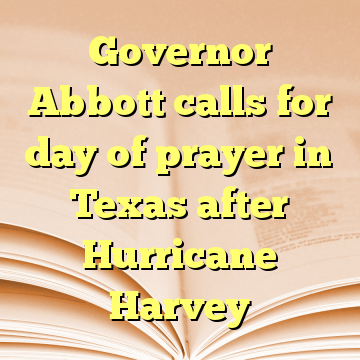 (Worthy News) – As the state of Texas continues to suffer the effects of Hurricane Harvey, Governor Greg Abbott has called for a day of prayer.

Hurricane Harvey began its assault on the Texas coast on Friday, August 25, 2017, causing massive destruction along the Coastal Bend before moving up the Texas coast into Central and Southeast Texas resulting in unprecedented flooding and tragic loss of life.

Gov. Abbott issued a proclamation stating in part that, “Texans have remained strong throughout this ordeal, with neighbor helping neighbor by wading into the flood waters or sorting through wind damage to rescue fellow residents. The people of Texas are grateful for the outpouring of support and resources from around the country and around the world that have been sent to Texas to assist with the damage as we begin the process of healing and rebuilding. Throughout our history, Texans have been strengthened, assured and lifted up through prayer.” [ Source (Read More…) ]