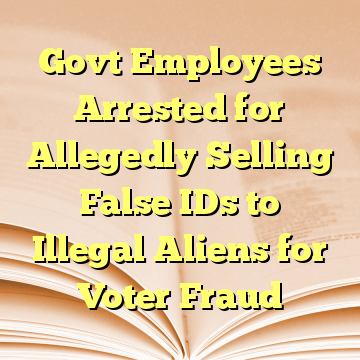 (Worthy News) – Federal authorities arrested six persons last week involved in an apparent scheme to produce false identification documents through the Massachusetts Registry of Motor Vehicles (RMV), some of which were then used as ID to illegally vote in Boston, reported Judicial Watch.

Four RMV employees were arrested along with a document vendor and document dealer for allegedly conspiring to provide Puerto Rico licenses and official state ID cards to illegal immigrants in exchange for cash. In some cases, the false identities and addresses that the perpetrators sold were used to fraudulently register to vote in the state of Massachusetts.

The identity theft operation was uncovered in 2015 when Massachusetts State Police received an anonymous letter alleging that an RMV employee was selling stolen identifications and drivers’ licenses. [ Source (Read More…) ]