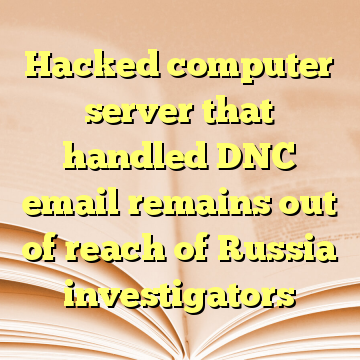 (Worthy News) – It is perhaps the key piece of forensic evidence in Russia’s suspected efforts to sway the November presidential election, but federal investigators have yet to get their hands on the hacked computer server that handled email from the Democratic National Committee.

Indeed, the only cybersecurity specialists who have taken a look at the server are from CrowdStrike, the Irvine, California-based private cybersecurity company that the DNC hired to investigate the hack — but which has come under fire itself for its work.

Some critics say CrowdStrike’s evidence for blaming Russia for the hack is thin. Members of Congress say they still believe Russia was responsible but wonder why the DNC has never allowed federal investigators to get a look at the key piece of evidence: the server. Either way, a key “witness” in the political scandal consuming the Trump administration remains beyond the reach of investigators. [ Source ]