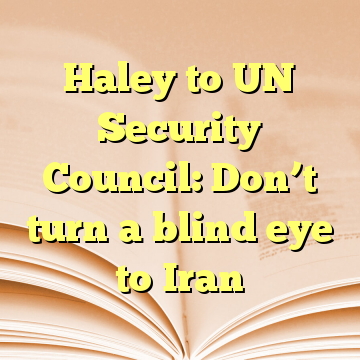 (Worthy News) – The UN Security Council must not ignore Iran’s aggressive behavior, its ballistic missile testing and its violation of this body’s resolutions regarding its military activity, US Ambassador to the United Nations Nikki Haley said on Wednesday.

She urged the 15-member body in New York to follow in the footsteps of the United States by changing its policy toward Tehran or risk it becoming another North Korea.

‘”When a rogue regime starts down the path of ballistic missiles, it tells us that we will soon have another North Korea on our hands. If it is wrong for North Korea to do this, why doesn’t that same mentality apply to Iran’,” Haley asked the UN during its quarterly open debate on the Middle East. [ Source: Jerusalem Post (Read More…) ]