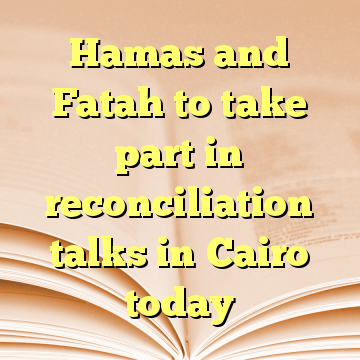 (Worthy News) – High-level Hamas and Fatah delegations are scheduled to participate in reconciliation talks in Cairo on Tuesday in a bid to start work on ending the decade-long territorial division between the West Bank and Gaza Strip.

The talks, which are slated to last for three days under the auspices of the Egyptian Intelligence Directorate, are set to take place several weeks after Hamas agreed to dissolve its governing body in Gaza and invite the Palestinian Authority to take its place. Hamas has controlled Gaza since it ousted the PA in 2007 from the territory.

While both rival parties have said they are optimistic about restoring the unity of the West Bank and Gaza, they still have to overcome a number of obstacles to do that. [ Source (Read More…) ]