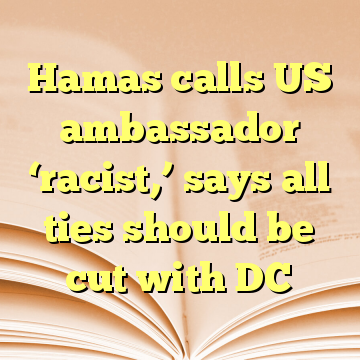 (Worthy News) – The Palestinians should cut all ties with the United States because of “racist” and “ignorant” comments US Ambassador David Friedman made to The Jerusalem Post last week, Hamas spokesman Fawzi Barhoum said on Saturday.

Friedman, a driving force behind US President Donald Trump’s decision to recognize Jerusalem as Israel’s capital and move the embassy there from Tel Aviv, told the Post that while the Palestinians’ angry reaction was expected, “we were disappointed with some of the rhetoric, which was ugly, needlessly provocative and antisemitic.”